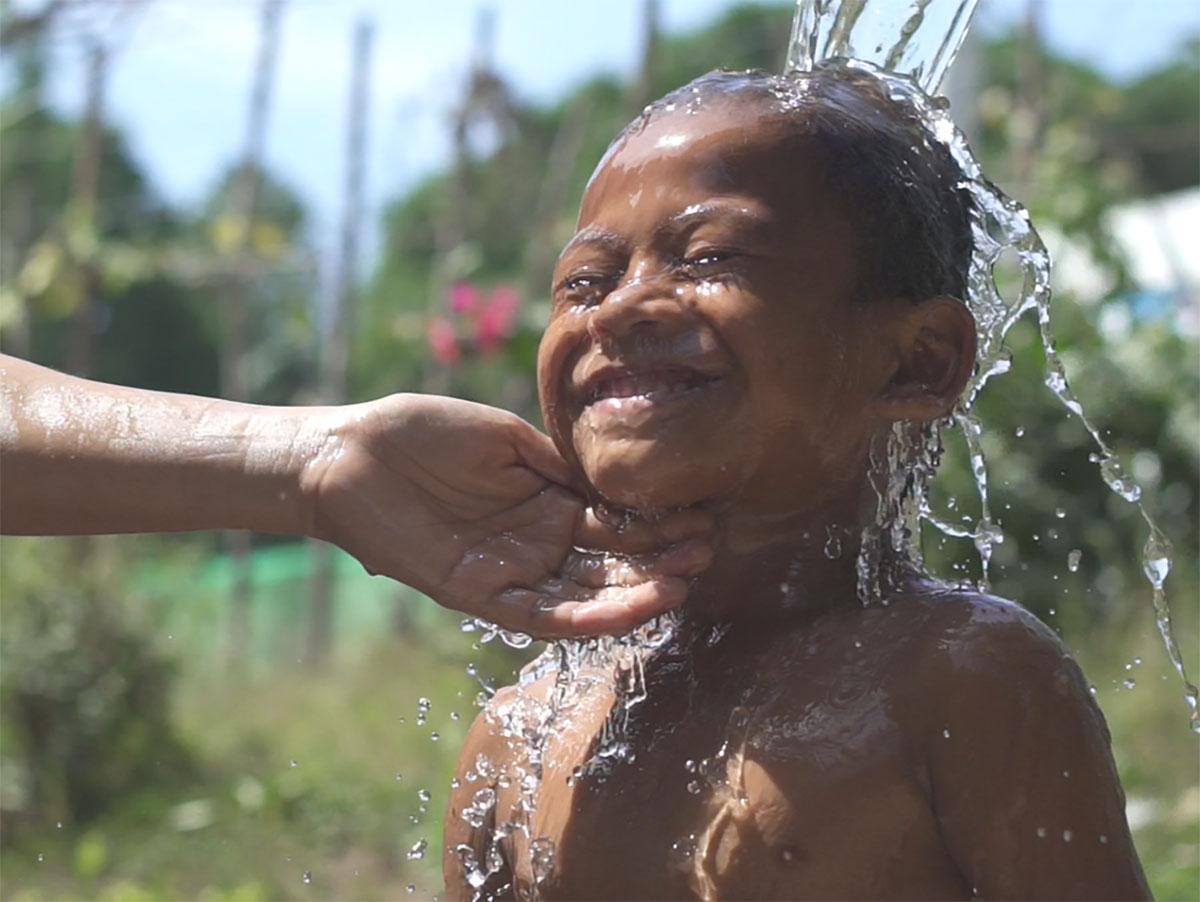 SPARKING JOY THROUGH WASH: Through the Integrated WASH Program, Manila Water Foundation (MWF) strives to bring joy to the lives of millions of Filipinos and beyond.

Mang Willy, a resident of Sitio Monicayo, recalled his experience as he walked from a well uphill, with his bucket of water, enough only for cooking. After spending hours lining up among his neighbors to fetch a bucket of water, Mang Willy wiped his sweat as he dreamt of having a better life with access to basic needs such as water. Meanwhile, Ate Ruby, another resident of the Sitio, shared how children in her area were unable to practice proper hygiene and sanitation because of a remote water source, thus exposing them to communicable diseases all year round.

Mang Willy and Ate Ruby are only two among the thousands of individuals across the country whose lives are affected by the lack of access to clean and potable water and sanitation.

Sitio Monicayo is a neighborhood of an Aeta community situated in Mabalacat, Pampanga. In 2016, Manila Water Foundation, in partnership with Clark Development Corporation and Clark Water, built a stand-alone water facility in the Sitio to provide water access to its 200 families. For the project’s sustainability, Sitio Monicayo has been chosen as a pilot community for MWF’s Integrated WASH Program—a holistic intervention of WASH services, intended to serve a community through water and sanitation access, while transferring knowledge on resource management and educating the community about hygiene and sanitation practices. The water facility built in the Sitio is only the first step towards helping the community to achieve WASH.

WATER FOR SITIO MONICAYO: In 2016, Manila Water Foundation in partnership with Clark Development Corporation and Clark Water, built a stand-alone water facility in the area.

MWF assisted the community in forming its Water Group, a circle of residents that would oversee the maintenance and operations of the water facility. Mang Willy and Ate Ruby, to date, are actual Water Group leaders: Mang Willy currently serves as the Water Group President, while Ate Ruby serves as a Water Collector. Now that the water facility and the Water Group are in place, MWF is conducting discussions and assessments in the community to proceed to the next phase of the program—the sanitation phase.

PARTNERS FOR A CHANGE: Residents and Manila Water Foundation tie up to sustain the water access in the community, forming a water group that is led and operationalized by community members themselves.

The Integrated WASH framework being implemented in Sitio Monicayo will serve as a benchmark for future WASH communities, including one in Barangay Sapang Uwak in Porac, Pampanga.

Since its establishment in 2005, MWF has been focused on providing services that are in line with its mother company’s expertise—water supply and sanitation. Today, MWF focuses its efforts in making a more meaningful impact by serving one community at a time.

THE JOURNEY AHEAD: In the years to come, MWF hopes to scale its Integrated WASH Program to other corners of the country.

Mang Willy emphasized the importance of collaboration among his peers in the sustainability of the Program within their community. “Sabi ko sa aming grupo, alagaan natin ito. Ito ang daluyan para tayo ay mapaunlad,” he said.

As of 2018, MWF has served more than 2.6 million Filipinos through its Integrated WASH, Flagship, and Special Programs combined, but this is only the beginning of MWF’s journey towards delivering sustainable WASH to marginalized communities. In the years to come, MWF hopes to scale its Integrated WASH Program to other corners of the country—leaving no toilet-less and water-less community behind.

For WASH partnerships and donations, you may reach Manila Water Foundation via [email protected] or 09153203000.