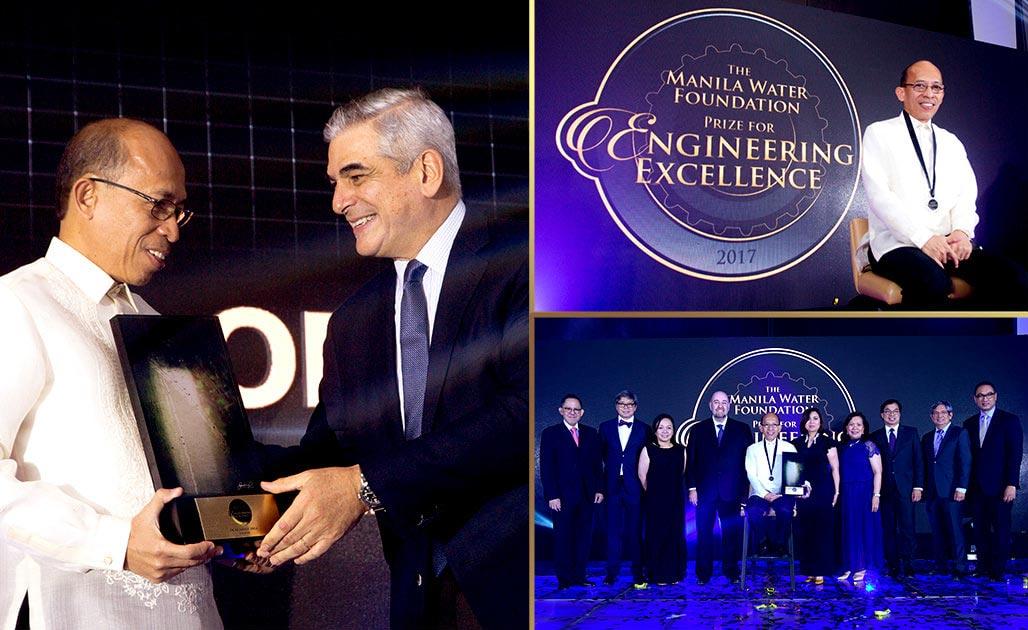 Dr. Ricardo F. Orge of PhilRice was named as the sole awardee of the 2017 Manila Water Foundation Prize for Engineering Excellence. He received a trophy entitled “The Last Light” which was designed by Ayala Corporation Chairman Emeritus Jaime Zobel de Ayala, PhP500,000, and a medal during the awarding ceremony held at Seda Vertis North in Quezon City. ​

After a rigorous screening process, the 2017 run of the Manila Water Foundation Prize for Engineering Excellence (the Prize) has come to a close and a scientist with a heart for Filipino rice farmers has been chosen to be most fitting to the title.

Dr. Ricardo F. Orge, a Supervising Science Research Specialist from the Philippine Rice Research Institute and an Agricultural Engineer by degree and profession, was named as the sole awardee of the 2017 run of the Prize.  Spearheaded by the Manila Water Foundation (MWF), in partnership with the Department of Science and Technology (DOST) and the Philippine Technological Council (PTC), the Prize is a biennial search for outstanding Filipino scientists and engineers whose inventions and innovations enabled change in the lives of the poorest of the poor and at the same time champion water, sanitation, environment, and sustainability.

Since 1992, he and his team have been studying and developing technologies for the improvement in farming and other related industries. One such innovation is the Continuous-type Rice Hull (CtRH) Carbonizer, a machine for processing rice hull, improving the income-generating activities of the farmers while addressing environmental and climate change concerns. Combined with a highly diversified and integrated rice-based farming system, its popularity has been increasing among farmers in the Northern Luzon region, and is now catching the attention of other LGUs in exploring its use for other agricultural and livelihood purposes.

Among the beneficiaries of the said technology are rice farmer cooperatives in Nueva Ecija and Bulacan who use the machine in growing mushrooms, which serves as a source of additional income during the months before the harvest season.

“Before, we just used a drum to pasteurize the fruiting bags to plant mushrooms. Although it worked, it was such a slow process. But now that we have a carbonizer which was designed by Dr. Orge, we became more efficient, and our income doubled. We are extremely comforted by this and are grateful to him that we are among those that have been blessed,” [Translated] Liwayway Danilo, one of the technology’s beneficiaries, shared.

“He is a very unassuming man, very humble. It is a greatest pleasure that I will be able to say that he is not only one of the best, excellent, engineers in the country today, but he is also a very good man,” he stated.
​
Also, during the event, Dr. Orge shared that his motivation behind his breakthrough inventions was his father, a simple coconut farmer. He also expressed his gratitude towards the proponents of the award and promised to continue helping farming communities in the country.

“My deepest gratitude to Manila Water Foundation and its partners, the DOST and PTC. I would like to emphasize that by giving me this award, you are honoring the millions of Filipino rice farmers whom we are serving. This award is a constant reminder for me to continue giving my best for our farmers. My achievements are not something which I should boast, but something that I can use and will use to encourage and inspire others. This award comes with a renewed commitment to give and continue giving my best because it is expected of me as a public servant and as a Christian,” he shared.

Also present during the awarding ceremony were DOST Secretary Fortunato de la Peña and PTC President Engr. Federico Monsada who also shared about their programs for the Philippine scientists and engineers.

As part of the Prize’s activities, Dr. Orge will be going around the country in various events to share his inventions with fellow professionals, innovators, and students in the science and engineering fields. Call for nominations for the Prize will resume in 2019.